Making sure your little ones get enough sleep just might be one of the best things you could do for their health, both now and later on, experts say.

Scientists have long known that children who don’t get enough sleep may be at an increased risk of obesity, among other health concerns, but a new study suggests that having a late bedtime is linked to a greater obesity risk later in life, too. So, an early bedtime may be better.
“This study adds to a body of research that demonstrates that young children benefit from having a regular bedtime and bedtime routine,” said Sarah Anderson, associate professor of epidemiology at Ohio State University’s College of Public Health and lead author of the study.

How bedtime may be linked to obesity

For the study, which was published in this month’s edition of the Journal of Pediatrics, researchers analyzed data on 977 children who were part of the Eunice Kennedy Shriver National Institute of Child Health and Human Development‘s Study of Early Child Care and Youth Development.
The data, which tracked the children from preschool-age to adolescence, indicated at what time they went to bed when they were about 4½ years old, as well as their height, weight and body mass index when they were about 15 years old.
After comparing the children’s bedtimes with their health as teenagers, the researchers found that only 10% of the children who went to bed at 8 p.m. or earlier during their preschool years were obese as teenagers. However, 23% of the children who went to bed after 9 p.m. as preschoolers were obese as teenagers.
For the children who went to bed between 8 and 9 p.m. as preschoolers, about 16% were obese as teenagers.
“Preschool-aged children with early weekday bedtimes were half as likely as children with late bedtimes to be obese as adolescents. This was true even after taking into account other factors that we know are related to risk for obesity,” Anderson said.
“Other research has shown benefits for children’s behavior, cognitive development and attention,” she added. “Regular bedtime routines, including an early bedtime, also are linked to fewer sleep problems such as nighttime awakenings or difficulty falling asleep.”
But how exactly can sleep habits early in life be linked to health outcomes later in life? There are a number of plausible potential mechanisms in this case, Anderson said.
“First, children who have a regular early bedtime are more likely to get enough sleep. Not getting enough sleep can result in changes in the hormones controlling appetite and metabolism,” Anderson said.
“Also, staying up later in the evening provides more opportunity for snacking and viewing television commercials that promote snacking,” she added. “Recommending that preschool-aged children are in bed by 8 p.m. is a potentially modifiable household routine that may help to prevent obesity.”

Early snooze benefits the brain, too

While an early and full night’s sleep for children can benefit their bodies, it also can improve their brains.
“An early bedtime benefits a child’s physical health, as well as mood and mental health, because it allows time for restorative sleep, which is important for the repair and recovery of the brain and the body,” said Reut Gruber, researcher at McGill University in Canada and director of the Attention, Behavior and Sleep Lab at the Douglas Mental Health University Institute.
“Sleep deprivation impairs the physiological processes that allow for adaptive emotional regulation. Emotional regulation processes are dependent on a ‘dialogue’ or interactions between the parts of the brain called prefrontal cortex and the amygdala,” she said. “These neural areas that govern emotional regulation are sensitive to sleep deprivation. When people are sleep-deprived, the connectivity between the prefrontal cortex and amygdala is impaired, and this leads to an individual’s difficulty to regulate emotions.”
Additionally, “there is a vicious negative cycle, with sleep deprivation impairing emotional regulation and with impaired emotional regulation leading to increased stress and arousal, further interfering with sleep,” Gruber said.
A small three-week study published in the Journal of Pediatric Psychology in 2013 involved 32 children, between 8 and 12 years old, who were instructed to go to sleep either one hour later or earlier than usual. They were asked to complete tasks that measured emotional functioning, memory attention and math fluency at the end of each week, and the researchers found that going to sleep one hour later impaired children’s performance on the tasks.
A separate 2010 study published in the journal Sleepfound that adolescents with bedtimes set at 10 p.m. or earlier were significantly less likely to suffer from depression and to have suicidal thoughts.
The research involved analyzing data from 15,659 students in grades seven to 12 who participated in the National Longitudinal Study of Adolescent Health, which included their bedtimes as well as their mental health.
“A variety of theories have been developed to explain why we need to sleep,” said Dr. Sumit Bhargava, clinical associate professor of pediatrics at the Stanford University School of Medicine and sleep physician at Lucile Packard Children’s Hospital.
“Some of the reasons are energy conservation theory: We sleep to conserve energy so we can be functional during the day,” he said. “Restorative theory suggests we sleep to ‘restore’ something that we lose while awake, with the body repairing and rejuvenating itself. Important hormones are secreted while we sleep and byproducts of the brain’s activity are cleared. … Brain plasticity theory suggests sleep is correlated to changes in the structure and organization of the brain.”

Therefore, a child’s bedtime is not nearly as important as the amount of sleep he or she is getting each night, Bhargava said. 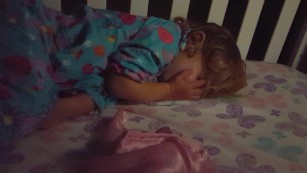 The woes of getting your toddler to sleep 02:38
“An early bedtime, per se, will not necessarily affect a child’s physical health or mood and mental health in a positive way. The goal should be, choose an age-appropriate bedtime that allows the individual child to get the hours of sleep the child needs,” he said.
“Set an appropriate bedtime based upon the amount of sleep your child needs to be functional and effective during the day. Then, be consistent with it, even on weekends,” he added. “Sleep is just as important to human life as eating and breathing. We spend almost a third of our lives sleeping.”
The American Academy of Sleep Medicine released updated sleep guidelines for children in June, recommending that:
Roughly, infants should sleep by 7 p.m., toddlers by 7:30 p.m., younger children by 8 p.m., preteens by 8:30 p.m. and teens between 9 and 10:30 p.m., said Harriet Hiscock, associate professor at the Murdoch Childrens Research Institute in Australia.
“There is no hard and fast rule for this, as sleep quality is probably more important than sleep duration, at least in children,” she added. “A regular bedtime and bedtime routine are probably more important.”
To get your child to go to sleep, Gruber advises, don’t negotiate bedtime.
Reference: http://edition.cnn.com/2016/09/05/health/bedtime-children-health-benefits/
http://vistar-co.com/wp-content/uploads/2016/11/150513194606-01-better-sleep-exlarge-169.jpg 438 780 ویستر http://vistar-co.com/wp-content/uploads/2015/11/logo.png ویستر2016-11-26 10:36:522016-11-26 10:36:52How an early bedtime can have lasting effects on kids
0 replies

Want to join the discussion?
Feel free to contribute!

Sleeping Positions to Relieve Back and Neck Pain